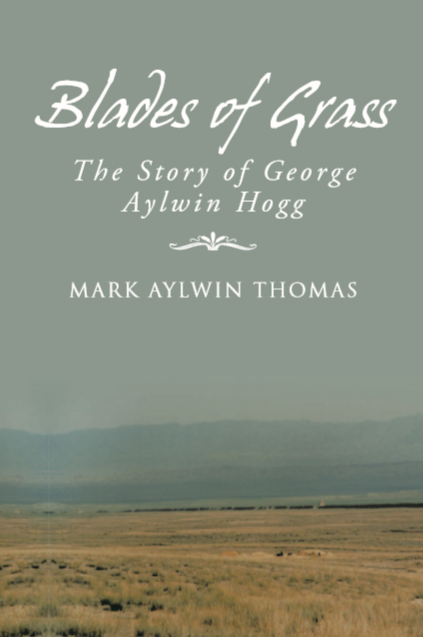 Blades of Grass: The Story of George Aylwin Hogg - Biography

Book Synopsis: This is the story of a young Englishman hero who is remembered with great respect in China still today, more than 70 years after his untimely and tragic death at the age of only 30. George Aylwin Hogg was a man of remarkable dedication and honour who immersed himself in the culture, language and life of the Chinese people he served in the years 1938-45. This book explores the background of how this inspirational, selfless, dedicated, extradordinary young man became who he was, and how, by putting one's trust in fate and through shrugging off the shackles of prudjudice against race, creed and language, much lasting good may be achieved. The narrative gives an insight into the Chinese people as people, rather than as the political pawns and players that we normally see. This is a personal and compelling window into the character of this remarkable man whose name and legacy lives on in China today.

Author Bio: The author was born in 1946, about six months after the tragically early death of his uncle George Aylwin Hogg: the subject of Thomas's book Blades of Grass. Mark Aylwin Thomas was born and raised in Sheffield, the youngest of a family of five children. Father, Donald R. O. Thomas, was an industrial educationalist. Mother, Barbara who was the Hogg's eldest sister, was in her younger years a teacher of Dalcroze-Eurythmics on both sides of the Atlantic. After attending Abbotsholme School, the author took a gap year travelling in the United States and Canada, spending most of his time there in Alaska with his sister Judith and her family. He went on to study printing technology and worked in the industry in Derby until 1974, when he moved to Finland with his Finnish wife Helena. Living in the midst of lakes and forests, near the town of Suonenjoki, Thomas set to making a life as a farmer � dairy, beef, strawberries, and forestry. As a sideline he provided a translation and copy editing service to the region's industrial and scientific community. As a mature student, Thomas took a degree in information technology and during the final ten years of his working life was a civil servant responsible for network administration and support in local government. Mark's unusual middle name, Aylwin, which he shares with his uncle, is of ancient Celtic origin, and it was by this name that his uncle was known within the family. In 1988, the Chinese government invited members of George Aylwin Hogg's relatives to attend a series of memorial events to be held in China that spring. The events were in commemoration of a New Zealander, Rewi Alley, an old colleague of Aylwin's, who had died aged 90 in December the previous year after living in China for 60 years. In response to the invitation, the author was elected to represent the family at these events. During his trip to China, Thomas was asked if he would return later in the year to act the role of his uncle in a mini-series for Chinese television. His Aunt Rosemary encouraged him to do so by stating that he and her beloved brother were so much alike in many ways. And so, Thomas returned to China for three months after his strawberry harvest had been safely gathered in. During his time in China, the author became fascinated by the story of his uncle and came to realize to what extent his uncle was regarded in China as a national hero yet was virtually unknown in his own country. Aylwin's sister, Rosemary, passed all of her brother's papers to the author for safekeeping and research for his book about his uncle. Working on it during the winter months, while the strawberry fields were deep under snow, and arctic weather kept him indoors, his book "Blades of Grass: The Story of George Aylwin Hogg" took shape but then life got in the way and the manuscript lay dormant for some years. Now in retirement and living in the south of Finland, in Kirkkonummi, the author has managed to finalize his book which was then published on 24 January 2017 by AuthorHouse. Aylwin's papers have now been passed to the archives in the Bodleian Library in Oxford for posterity.