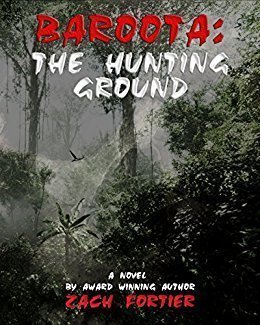 Book Synopsis: "Baroota" is a fictional tale of Nick Hudson a retired and aging cop attempting to get in one last mission to make a difference. He gets sucked in to an "off the books Black Ops mission" to rescue victims of Human Trafficking being sold into sexual slavery. He meets NÃµnkos Zia or NÃµn. A woman born in South Africa and herself a former victim of Muti-medicine, a type of medicine still practiced in South Africa that weaves the occult and human sacrifices into the locals belief system. She is also a victim of human trafficking, from which she barely escaped after taking revenge on her captors. They are outsiders in a dark twisted tale of deceit, lies and double crosses that take them to the "Darien Gap" of Panama, one of the most remote areas in the world to hunt human traffickers.

Author Bio: Zach Fortier was a police officer for over 30 years, specializing in K-9, SWAT, gang, domestic violence and sex crimes as an investigator. He has written five books about Police work. "Curbchek" the first book is a case by case account of the streets as he worked them from the start of his 30 career. "Streetcreds" the second book details time Zach Spent in a Gang task force and the cases that occurred. The third book is by far the most gritty: "Curbchek-Reload". In "Curbchek-Reload" Zach is damaged and dangerously so, suffering from PTSD and the day to day violence of working the street. "Hero To Zero" is Zach's fourth book and recalls cops he worked with that were incredibly talented but ended up going down in flames, some ended up in jail, prison and one on the FBI's ten most wanted list. Zach's fifth book is just out and is titled "Landed On Black" and covers the constant state of hyper-vigilance required to survive the double crosses and betrayals that occurred on the streets and in the police department. Zach's latest book I am Raymond Washington, provides the reader with an unprecedented look into the life of the original founder of the Crips gang. Filled with eyewitness accounts and recollections from friends and family give the reader a look into the life of the Original Crip.