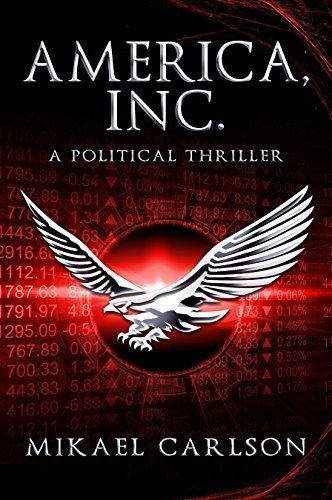 Award-winning author Mikael Carlson blends the intrigue of Game of Thrones with the omnipresent government surveillance and public manipulation of Orwell 's 1984 in the first of this epic series of novels.

America, Inc. introduces us to the world dominated by the corporate state: a terrifying look at a future where people are dependent on the system for everything. There is no crime, unemployment, war or poverty. The only sacrifice that is required is the one that matters most “ your freedom.

Born from the ashes left by the collapse of world governments, the world in 2088 is eerily similar to the present “ surveillance, propaganda, greed, and opportunists seeking to seize the reins of power for their own benefit. Through manipulation and deceit, corporations exploit their workers for profit all to the benefit of the 1% who have become an all-powerful elite class.

Now a great struggle is erupting and the long-forgotten meaning of liberty hangs in the balance. When the two sides clash, which side will you choose?

Author Bio: Mikael Carlson is an award-winning political fiction author, a proud U.S. Army Paratrooper and retired Army National Guardsman. He graduated with a Master of Arts in American History in 2010 and with a B.S. in International Business from Marist College in 1996.

An avid traveler and unabashed political junkie, he is the author of the Politics as Unusual blog You can find him at www.mikaelcarlson.com.