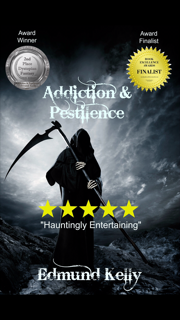 Book Synopsis: Brace yourself for one hell of a ride! In this fast-paced post-apocalyptic thriller, a dark shadowy figure releases the first of the Four Horsemen of the Apocalypse. Once released, the ˜White Horseman ' unleashes a devastating pestilence (plague).

Meanwhile, in Boston, Drew Murphy a raging alcoholic awakens to find his wife has left him after an explosive argument about his drinking. While pleading for his wife to return, he receives an untimely phone call beckoning him to Florida to be by his dying mother 's bedside.

Once in Florida, the pandemic reaches biblical proportions and Drew watches as the world is plunged into chaos. Can Drew, an EMT and former Marine, overcome his addiction to alcohol and fight his way through a disintegrating society to save his family and humanity? Grab your copy now and find out!

Addiction & Pestilence is an exciting debut novel by Edmund Kelly that is a full throttle ride that never lets off the gas.

See what reviewers are saying about Addiction & Pestilence:

- œEdmund Kelly has created a diverse cast of people, warts and all 

-"It is a horror story with a powerful message."

Author Bio: My name is Edmund (Ed) Kelly. I recently published my first book, Addiction & Pestilence, which just won 2nd Place for Best Dystopian Fantasy in the 2017 Virtual Fantasy Con Awards. It was also a Finalist for the Best Horror Novel in the 2017 Best Excellence Awards.

‹When I'm not spending time with my family, I love to read and write. I'm currently working on the 2nd book titled, Demons & War which is the second book in my Post-Apocalyptic series, Slaying Dragons: A Journey Through Hell.