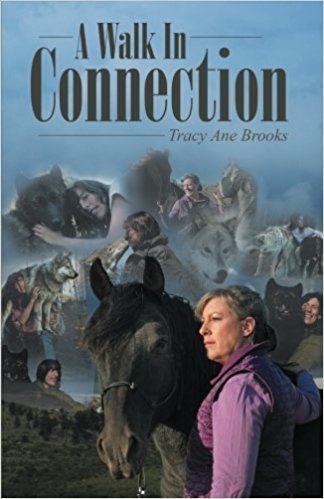 A Walk In Connection - Nature

Book Title: A Walk In Connection

Book Synopsis: Wolves In My Path

Tracy Ane Brooks is handed a rare opportunity after attending an educational program with a live wolf named "Shaman."

This meeting was destiny, a gentle nudge to awaken a new level of awareness and understanding wolves and a new life's path.

A visit to the Sangre De Cristo mountain range and a newly formed wolf sanctuary inspires Tracy to become involved in the creation and evolution of a wild place. If eyes act as windows into the soul, looking into Cyndar's eyes would mark the beginning of her life with wolves.

Traveling With A Wolf

During an educational tour to New Mexico, Shaman spent the entire drive time sitting on the back seat, completely ignoring Tracy. It was during the trip that Tracy became introduced to the intriguing nature of wolves.

Tracy moves to the sanctuary and desires to learn everything about wolves, to study how they live and behave, anything and everything, Wolves fascinate her. Kent shares a short history of the wolves, before her time.

The Story Of Rowdy

Rowdy, has a powerful lesson to share. You can take the wolf out of nature, but you cannot take, nature, out of the wolf!

Tracy learns how sharp Shaman is at reading her body language by unintentionally giving him all the wrong body signals. Tracy did not fear walking Shaman: she feared her inadequacy as a two-legged human to keep up with this animal and any problem that may arise from that.

Nikkolah was a powerhouse of potential in all directions, a guardian of free will, and he had proven himself time and time again. Tracy learns the hard way how to walk Nikkolah.

Hugging Shaman was out of the question. It was as if the wolf did not know what to do with the energy and emotion of a human hug; that was too much for him, and he voiced his opinion.

In a dark turn of events, Alpha Cyndar becomes victim to brawling of the younger wolves, especially a wolf named Zephyr. There was dense, undeniably heavy and sad energy present around Cyndar; it was as if she was depressed, her heart had broken.

Woman Who Falls Behind Wolves

Tracy learned a painful lesson and experienced a behavior in Shaman that would change the nature of the relationship. When the initial pain subsided, Shaman remained a ball of fury and protectiveness. He circled Tracy, watching Kent: his body was stiff and rigid.

Sila a temperamental wolf pup needs a home, she instantly falls for Shaman and becomes his traveling companion. As Tracy focused on frantically digging, Sila quickly lost interest in the fox; after all, what Tracy was doing appeared more exciting to Sila, and she dropped the fox.

No matter where we were, or whom we were in front of, Shaman felt no inhibitions to show us exactly what he was feeling toward Kent. As Shaman becomes mature as Kent predicts, his personality changes and the wolf becomes threatened towards Kent.

It did not take long for the wolves to discover that they could jump up onto the slope of the roof and climb to the top. And for one very sensitive young wolf named Peaches would come to the aid of Tracy's son Tamas and help round-up a feral escapee.

As Tracy grabbed hold of Noya's thick neck fur, She felt a surge of tremendous pressure and sadness come into her body from her wolf friend Noya. When the loss of this dear wolf happens, it brings Tracy closer to understanding just how connected she was to this wolf.

The same morning Whisper's pups were found a golden eagle appeared. After a few days of sitting high in a tree overlooking Whisper and her puppies, confusion arises at the question of how many pups and concern for the safety of the helpless creatures.

Tracy's dream of one day owning a horse is realized when a Percheron gelding named Moses comes into her life. She wonders did she die, and these horses were here to collect her?

Outstanding In My Field

Two special wolf pups come into Tracy's life, and by working with them using the same ideas she had resolved Ikus's misbehavior, Tracy successfully calmed the sister wolves, especially a young wolf named Magpie. Tracy learns that what works with horses, works with wolves.

Magpie, a remarkably intuitive creature, seems to have the ability to see pictures we formulate in our mind's eye. And she goes on to fulfill a dying woman's last wish.

A young woman from the UK comes to volunteer for a year, and she spends time learning what Tracy has done with the wolves and horses. Sally proves she has the same potential for success with horses. Sally would surprise Tracy by how well she used her intuition with the animals.

Tracy's final challenge would be to work with very feral Illiamna, the closest opportunity she would have to use her mirroring on a wild wolf, and with Merlin, a wild caught problem Mustang. To truly understand an animal, we must first strip away all preconceived judgments and notions about what we think we know or have learned or been programmed to believe about that animal. The animal's behavior is a direct reflection of what we believe about ourselves.

Author Bio: Tracy Ane Brooks grew up in the mountains, outside of Boulder Colorado. An artist at heart, Tracy grew up immersed in drawing her favorite animals. Throughout her childhood, she was surrounded by animals. Tracy spent countless hours running in and exploring the forests and creeks of her home with her Alaskan malamute and other mixed-breed dogs. Her love of animals continued after Tracy graduated high school and pursued a career in silversmith jewelry design.

In 1989 Tracy's business "Black Wolf Sliver" donated jewelry to a developing wolf sanctuary in Southern Colorado called Mission: Wolf. That year Tracy moved to the refuge and began traveling with Kent Weber and learning to handle a wolf named Shaman.

Tracy became instrumental in building the captive wolf sanctuary and solar-powered nature center. Pursuing her love of art and animals and sharing it with the world along the way. Tracy's most significant contribution was her work with the wolves. With her partner Kent, their program reached countless of everyday people through seated events for more than 25 years. During that time Tracy learned simple and effective ways to handle feral behavior. Successfully helping the wolves to be calm, and happy in un-natural situations.

An award-winning photographer, Tracy provided film footage of wolves howling that has appeared several times on The "Late Night with Jimmy Fallon" in a segment skit called "Cell phone Shootout" with the "Wolf Waker." She and Kent, appeared as a background wolf experts, on Cesar Milan's Dog Whisperer, Episode 619, "Wolf Dogs out of the Wild" That aired; Oct 29th, 2010.

In 2015, the Travel Channel website featured Tracy in a special titled "The Gray Wolf" http://www.travelchannel.com/shows/the-way-i-see-it/video/pov-the-gray-wolf

Possessing a deep understanding of the instinctual connection we share with animals takes a lot of time, patience, and experience. And a decade after Tracy began her work with wolves, horses came into her life. Desiring to discover for herself the magic behind "horse whispering" Tracy embarked on an in-depth study of all things horse. During that time she learned the best lesson was to listen to the horse to resolve, feral behaviors. Horses, humans, and wolves all share the instinct of flight, fight, and freeze. And by using body language and intuition Tracy has developed trust with these animals, beyond anything she could have dreamed possible.