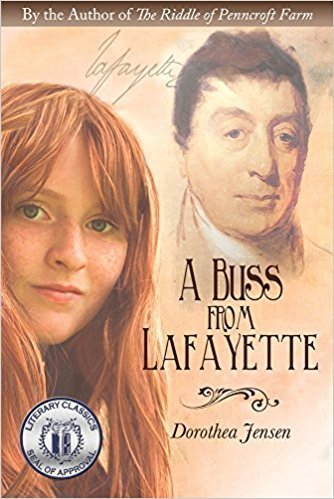 Book Title: A Buss from Lafayette

Book Synopsis: Fourteen-year-old ClaraHargraves lives on a farm in Hopkinton, a small New Hampshire town,during the early 19th century. She has a couple of big problems. Firstof all, she has a stepmother, Priscilla, who used to be her spinster schoolteacher aunt. Clara resents that her late mother's older sister has not only married her father but is about to have a baby. To make matters worse, "Prissy Priscilla" keeps trying to make the rambunctious, clever, and witty Clara act like a proper young lady. Secondly, Clara has red hair, making her a target for teasing by a handsome older boy, Dickon Weeks, and by her pretty seventeen-year-old "Dread Cousin Hetty." Clara, however, has a secret plan she hopes will change this. During the last week of June, 1825, Clara's town is abuzz because the famous General Lafayette is about to visit their state during his farewell tour of America. In those eventful seven days, Clara learns a lot about her family, Hetty, Dickon, herself, and about Lafayette. She comes to understand the huge and vital role the young French aristocrat played in America's Revolutionary War and to see that her problems might not be quite so terrible after all.

Author Bio: Dorothea Jensen, born in Boston, Massachusetts, grew up in Chillicothe, Illinois. She majored in English literature at Carleton College and earned an MA in education at the University of New Mexico. She has been an ESL tutor for refugees, taught junior high and high school English, served as a Peace Corps volunteer in Brazil, and written grant proposals for arts organizations. In 1989, Harcourt Brace Jovanovich published Dorothea's novel for young readers about the American Revolution, The Riddle of Penncroft Farm. In addition to other honors, it was named an International Reading Association Teacher's Choices Selection and has been read in classrooms throughout the U.S. since its release. A Buss from Lafayette is set in the small New Hampshire town where Dorothea lives. Two things inspired her to write this story. First was her meeting a woman whose ancestor received a kiss (a buss) from Lafayette on his Farewell Tour of 1824-5. That buss, passed down through generations, was passed along to Dorothea. Second, she learned that Lafayette passed right by her house in 1825. This all sparked her interest in Lafayette's contributions to our struggle for independence. Dorothea also enjoys writing rhyming verse. She has written a series of award-winning illustrated modern Christmas stories in verse featuring the very high tech Santa s Izzy Elves.